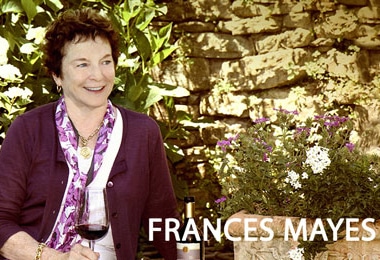 In Italy, it’s hard not to live a good life. The wine flows, good food is abundant and there are always great times to be had with friends and loved ones; it’s truly a country of endless adventure. Frances Mayes, author of celebrated bestsellers “Under the Tuscan Sun,” “Bella Tuscany” and “Every Day in Tuscany” first fell in love with Italy in her early twenties, when she visited for a conference with her husband. Most notably, Mayes says, she admired the generosity and vivacity of the people there.

“Everyone seemed to inhabit their lives upfront and enjoy the day,” she recalls. “I wanted to live like that, too.” And so sparked Mayes’s own personal journey to living well, not just in Italy but throughout her life day to day. Part of this, she says, has to do with having a creative group of friends and a loving family she spends time with frequently. Additionally, it means putting out good work that leads somewhere unexpected.

“I like to put a lot of my energy into my surroundings—that’s very important to me, no matter where I am,” Mayes says. Her hard work led to a distinguished spot on The New York Times bestseller’s list.

When “Under the Tuscan Sun” was published in 1996, it remained on the list for two and a half years and then returned in 2003, when the film adaptation starring Diane Lane was released. “Women in Sunlight,” Mayes’s 1974 novel about four American strangers who bond in Italy, has also been picked up for a film production. Mayes’s travels clearly serve as her inspiration when it comes to writing. “Under the Tuscan Sun” rose out of the excitement Mayes felt living in a new country and learning the native language, meeting different people and cooking new, exotic foods. The book follows a woman who buys a rundown villa in Tuscany and discovers the city’s alluring art, cuisine, beauty and diversity, much as Mayes did during her trips to different parts of Italy.

“The ones who live in a house like this, I thought, must blossom and live big lives,” she says of the Tuscan farmhouse that she used for inspiration for the villa in her book. Mayes’ travels inspire her daily life as well. “The untraveled life seems incredibly narrow to me,” she says. “I like to find out about a new place and how it forms the people who live there. Besides, travel is just fun. Each trip changes you a little.”

Mayes, who spends half the year in North Carolina and the other half in Italy, returns to Raleigh in July for The Cardinal’s The Art of Living Well Speaker Series to share what she’s learned from her travels and why she encourages others to “get out more.”

A Georgia native, she’ll also speak to how a Southern sense of place influences her to travel; returning to the South after splitting her time between Italy and the United States is also the subject of Mayes’ newest project, “A House Down South.”

When we asked what “living well” means to her, Mayes describes a dreamy scene consisting of a long table, set under trees, filled with bountiful courses of food coming out of a kitchen along with good wine and abundant laughter among friends and family. “That’s the good life,” Mayes says.